History of Tae Kwon Do - Background

Early history of the Korean Peninsula is a melting pot of tribal warfare and invasion by the Mongols, the Manchu Ch'ing dynasties and other northern peoples. This period is, as far as Korea is concerned, chiefly Protohistory, a period when we have few facts and quite a lot of materials which are often of uncertain value. Early Chinese records tell us of some tribal groupings such as the Puyo, the Okcho, the Yemaek and the I-lou. In the spring of 109BC the Chinese began an invasion of northern Korea and established four commanderies with the hub of Chinese administration in Korea at Nangnang, which endured for 400 years. This was a period of great Chinese influence on the Korean Peninsula, which had the effect of unifying many of the local tribes. On a tributary to the Yalu river a group who considered themselves a branch of the Puyo peoples united to form Koguryo under the rule of King T'aejo (53 - 46AD). Early references to Koguryo reveal a people who were fierce fighters, and given to warfare. They lived in a mountainous area ill suited for agriculture and apparently turned their hunting activities into a professional military way of life.

During the fourth century AD there arose three distinct and strong kingdoms in Korea, Koguryo in the north with Silla and Paekche in the south. The small Kaya league nested between the two southern states having strong ties with the Wa State of Japan. Koguryo was to continue its expansion through an elite military class called the Kyondang, at the expense of its southern and northern neighbours until it reached its peak in the 5th Century AD, covering half of the Korean Peninsula and much of Manchuria. Some tomb paintings indicate a form of hand and foot fighting from this period separate in style to the Chinese martial art of kwonbop, introduced around 520AD and made popular in Korea between 1147 and 1170.

The early sixth century saw the introduction of Buddhism to Silla and the annexation of much of the Kaya States by Silla. Silla then formed an alliance with the T'ang of China, in order to co-ordinate an invasion of Paekche, the T'ang from the sea and the Silla forces led by General Kim Yu-sin from the land. In 661, with Paekche secured, the T'ang/Silla forces set upon Koguryo. In the following years the T'ang attempted to establish control of Paekche at which point Silla broke off its alliance and routed the T'ang from the Peninsula. As the result of a concerted effort in 667, aided by a Koguryo defector named Namsaeng, Koguryo finally fell to the Silla forces in 668. The unifying of the Korean peninsula was complete.

A partial answer to Silla's military success was its military institutions. Growing out of a semi-official body dedicated to the nurturing of talent amongst upper class young males, there emerged at this time an elite paramilitary youth Corp. These were known as the Hwarang who had among their ranks the young Kim Yu-sin, later to become the master swordsman and leading General. The Hwarang were organised on a clan or village basis with a fixed social structure and were a firm base for national morality and spirit. They learnt traditional values through communal life and rites and learnt mutual understanding and friendship through military arts, poetry and music. During the wars of unification the Hwarang fought fiercely in the vanguard and, although very young, were leaders skilled in many of the military ways and in martial arts, such as Wrestling, Soo Bak-Gi and Tae Kyon (primitive forms of foot fighting adapted from sport). The martial spirit of the Hwarang and of Silla is revealed in the five precepts for secular life given to them by the Buddhist monk Won'gwang (d.640AD).

What followed was a period of relative peace and the decline of the Hwarang as a military organisation. It became known as a group specialising in poetry, music and dance for enjoyment and fun. This period also saw the gradual weakening of the throne of Silla until 936 when Wang Kon, a very strong Warlord, founded a new dynasty called Koryo, an abbreviation of Koguryo. It is from this that the modern name Korea is derived. It was during this time that Soo Bak once again became popular as a sporting activity and martial art. Koryo tried to repel or appease invaders until late in the Koryo Dynasty (the 13th Century) it had become a full-fledged participant in the Mongol adventure of conquest and one small fragment in the vast Mongol Empire, which stretched eastward to the Danube. Koryo was the launching ground of the Mongols against Japan but their attempts were thwarted by heavy storms, which the Japanese called "divine wind" (kamikazi). The 14th Century saw the expansion of the Chinese Ming and the contraction of the Mongol empire and the coming to power in Koryo of Yi Songgye in 1392 and the replacement of Buddhism by Confusionism as the State Religion. Confusionism advocated classical Chinese thinking, which played down the physical side of life and replaced it with reading, poetry, music and other classical arts.

This tended to stifle the development of Korean Martial Arts, which became almost none existent. The Yi Dynasty was to last until 1910, with various Kings introducing many social and cultural changes. Generally, it was a period of diplomacy more than continual war with Korea looking for assistance from Japan when threatened from the north, and looking to China when threatened from the south. Even so, Korea did spend many decades under the control of foreigners, particularly China.

From the late 17th century through to the early 19th, Korea was known as the "Hermit Nation" because it turned away foreigners, particularly the Europeans who were expanding their own empires at this time. Towards the end of the 19th century Korea set up relations with many Western Nations in an effort to offset Japanese influence.

In 1894 the Tonghak Rebellion brought both Japanese and Chinese troops onto Korean soil in an effort to protect their interests and to influence the Korean Monarchy. After the Sino-Japanese war (1894-95) and the Russo-Japanese war (1904-05) it was obvious that Korea was to come under Japanese protection.
The final Yi Dynasty King was on the throne for only 24 days when a new treaty with Japan stripped him of all power and thus the annexation of Korea by Japan in 1910 was merely an acknowledgment of what had already happened.

The Japanese were hard taskmasters and did all they could to subdue the Korean people, including the banning of the Korean language press and the compulsory teaching of Japanese in all the schools. Korean culture was frowned upon and the Korean people were forced into servitude, hiding much of their culture including their martial arts. When Japan became involved in World War II many Koreans, particularly those resident in Japan, were forced into the Japanese military. Towards the end of the war, the Americans invaded Korea to press back the Japanese but also in an effort to control the post-war occupation of the Korean Peninsula by the Soviets.
In 1948 the Americans and Soviets proclaimed the division of Korea into the Republic of Korea (South), with Syngman RHEE as President, and the Democratic People's Republic of Korea (North). The Soviets controlled north and the Americans controlled south. The North claimed the whole of Korea and in 1950 the North Korean military invaded south, resulting in the 'Korean War' lasting until the 27th July 1953. 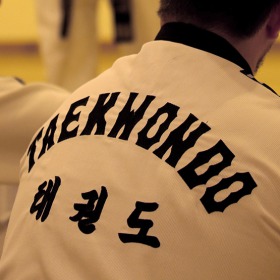 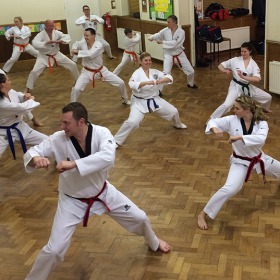 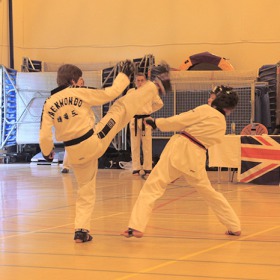